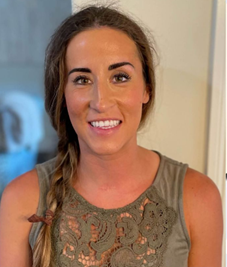 Erica has been with the team since June, and she understands the value she and her teammates bring to others through their work. During a recent interview with Baptist Press, she told the reporter, “I’m very passionate about this (her work) because I’ve lived it.”

In October 2018, Erica and husband Josh, along with their 15-month-old son, decided to go on a family outing to watch their alma mater Ole Miss play. About three hours into the trip, her son woke from a nap. Erica decided to unbuckle her seatbelt so she could comfort her crying son. “Within 10 seconds, we were hit by an 18-wheeler,” she said.

Although, thankfully, Erica’s son and husband were not injured, Erica was ejected from the SUV and landed about 40 feet away in the median on the highway. She was airlifted to the closest trauma hospital where she spent the next two months in a coma. Erica’s diagnosis: traumatic brain injury and a Level 3 diffuse axonal injury. Although she came out of her coma, she needed extensive therapy. Erica’s injuries affected her cognitive and motor skills.

She was transferred to Shepherd Center in Atlanta, where she stayed for the next six months, learning how to swallow, stand, and walk again. With time and hard work, Erica’s condition improved to the point she was released from the hospital.

To deal with her restlessness at home, Erica began walking around her neighborhood, which soon turned into running. As she worked to improve her health, she met Andrea Churchill during a workout at a local fitness facility. Andrea is the Regional Manager of Business Development at Rehab Without Walls NeuroSolutions. Andrea not only shared with Erica the wonderful work that Rehab Without Walls does, but soon after, hired her to join the team.

Erica, who has a bachelor’s degree in social work, had been working as a claims adjuster. “After my accident, I wanted to do more with my life,” she said. “For me, it’s not just getting a paycheck. I believe in this product, and I want to help the next survivor and caregiver.”

Congratulations, Erica, for being an Example and seeing the possibilities through your Attitude.

Erica, you are an inspiration!

Filed under: The Way We Lead

« Previous Story Next Story »
Back to The Way We Lead